The last session of a busy day (in regards to driving at least) was spent at the Ruthven Barracks just outside of Kingussie. The barracks was built between 1719 and 1721, on a prominent mound that had once been the site of a medieval castle of the Comyns, and later the Gordons. A separate stables block was added in 1734, on Major General Wade’s orders, for use by dragoons protecting troops marching along the adjacent military road. 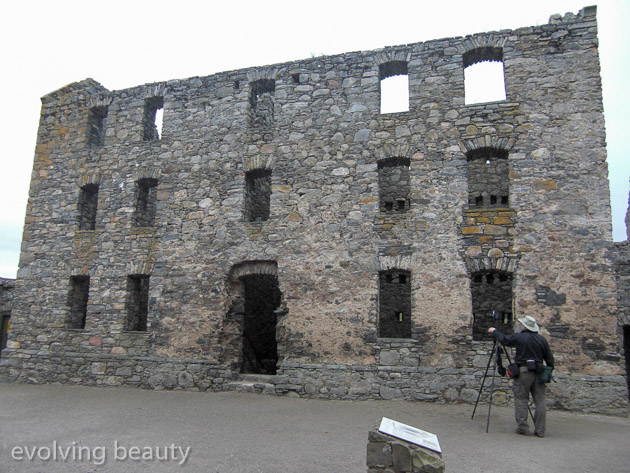 Though I'd picked Kingussie as ther place to stay for the night specifically because of the barracks, after all the driving, I needed a break before doing any more photography, so R_ and I took time out for dinner before heading over to the ruin. I actually didn't have much in the way of expectations for this location, as it is a Historic Scotland site, and I expected it to be closed by the time we arrived.


After parking the car, and walking up the hill, I was pleasantly surprised to find the site was both free, and ungated (most of the historic sites I've seen to date have had entrance fees, and caretakers, which makes working with a model in them impractical). As we arrived after 8pm, I actually thought the site would be locked tight.. After a quick look back towards the parking lot (with only our car in it), and around to the local roads (empty of any traffic), R_ and I set to explore the site photographically.
The barracks were a really rich space to photograph in - almost every building had something for R_ to work with, either in terms of massive joist-holes in the main barracks, or the large, empty windows which were perfect for R_ to perch on. Given it was well into the evening when we began, there was no way we'd be able to realize all the potential, but both R_ and I felt really good about the images we were able to make in the time we had.
The last set of images, completed at 9:30pm, was actually produced outside the barracks, on the wall facing the town; I felt a little concern about creating them in a place so easily viewed, but given the late hour, and the distance to the town (a mile) I felt it was worth the risk, given the beauty of the space. When we first came across it, R_ proposed I help her up into the highest window, and it was only after that composition was made did I hit on the idea of having her find a second pose that could be blended with the first, to create and even more engaging image. As a light rain began to fall, R_ and I packed up and headed back to the B&B,