This is one of the widest angle images I have ever made, due to stitching together images made with a 10mm lens (which effectively provides the same angle of view as a 16mm lens on a 35mm camera). The line of granite on the front left and right of the frame are actually the same straight line of stone…just as the sun is barely lighting the edge of the stone on the left side of the image, and casting light almost directly upon the stone reflected in the water pool.
No comments:

A First Session with Stephanie

Stephanie's boyfriend has known of my work for quite some time, and when he shared it with her, she immediately expressed an interest in working with me...but as a serious martial arts practitioner, it had to wait until a set of serious bruises faded from view.

Though the weather is inching towards a time when working outdoors is a viable option, Stephanie and I decided to have our first session together in the studio, where the weather would not present an issue.

For this image of Stephanie, I decided with her fair skin, it would be best to set her against black, so she would really stand out from the surroundings. I really have only taken two approaches to studio photography - much of my early work (1988-1998) worked with a black background, setting the model in a sea of darkness. From 1999 onward, I tended to prefer working with a white setting, usually setting the model against white sheets and using studio lighting to mimic natural light.
While working against the black, between "posed" images, I caught a glimpse of Stephanie's hands on the back of the chair she was seated on - they were beautifully lit, so I paused to make an image or two.
For the final photos of the session, I switched to working against white, and focused on a series of portraits; Stephanie's fair skin and light hair was a little challenging to work with on white, but the portrait above had some beautiful lines, and a great expression.
No comments:

Whenever I have "nothing to photograph", I fall back on composition. Line, shape and form. All images come down to this, in the end.
There are obvious questions when photographing other people's artworks (being it sculptures or graffiti), but in the above case, my motivation was pure - practice practice practice. I strongly feel that without constant pushing of the boundaries, and continual question of creative assumptions, there is no way to grow as an artist.
I have always loved "ghost" stickers, and this one, on an aluminum pole, was particularly striking to my eyes.
No comments:

I'd say this was my first outdoor session with a model for 2008, but given the two winter sessions working with Ingrid and ice, it is more accurate to say it was my first warm session with a model. Though still very much spring, the warm sun and light wind made working outdoors for a couple of hours more than reasonable.
I've worked on these rock before, but am always amazed at how easy it is to find new spaces to work in. For the above image, I really like how two-dimensional the composition became when combining the long lens and deep depth of field.
There are times when images are created through the creative dance between models and myself, and then there are images that just "happen" - the above photograph was made as Ingrid stretched out on a rock...just enjoying the beautiful warm spring day.
After photographing someone for a decade, it would be expected to have run the gamut of possibilities, but with Ingrid, her ability to respond to settings never fails to surprise. In this case, the strong diagonal in the rock was more than enough to inspire her into a striking, dynamic pose.
No comments:

There is a real pleasure to making an image which is just rich visual pleasure. My macro lens and galvanized steel helped create the above photo.
I have such a love of symmetrical compositions that it is pretty much the default, unless there is another more obvious approach. With this bollard, the bright yellow lines provided the perfect excuse to centre the subject.
Walking back from the waterfront, I caught a glimpse of this wet, weathered roof, and used a long lens to capture it.
No comments: 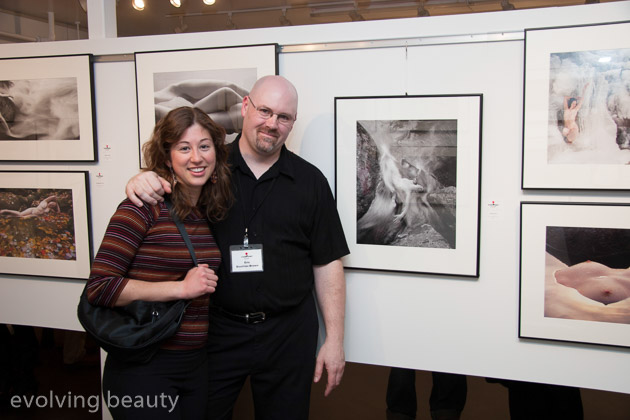 Memory of Water, an exhibition of water Nudes, opened tonight at ViewPoint Gallery, in downtown Halifax. View a video on the exhibition and the opening here. 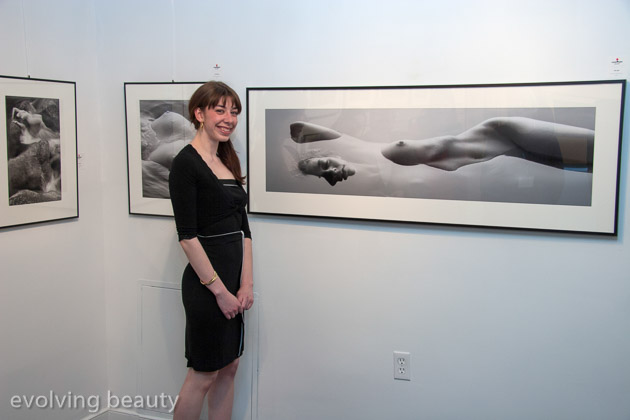 The opening was a great success, with over 120 people showing up, including many of the models. With each model who did show up, I made sure to get a portrait of them in front of their image (the above two images) 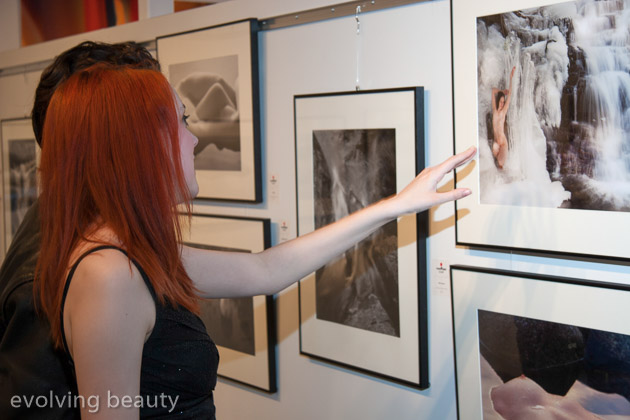