Hailey & I Return to the Coast (Atlantic Shore, Nova Scotia)

My second session of the year with Hailey was something of a mirror of the first; faced with a lovely warm, sunny evening, we headed for the coast, both to avoid hordes of bugs, and to give Hailey a chance to work with water - her favourite environment to model in.


We began the session with Hailey working in a thick bed of seaweed, and me taking advantage of how infrared light renders the rock-weed (Fucus vesiculosus). After some initial compositions with longer lenses, made on tripods, I decided to risk working out on the seaweed covered rocks with a wide-lens (hand held). The result was a much wider composition, with luminous seaweed in the foreground wrapped around a pale, elegant figure, below a dark, dramatic sky.

From working on the seaweed, Hailey moved on to working in the seaweed, clambering out into the ocean proper, and finding a rock to work around; after some experimentation, she found the perfect line to pose with!
Taking a break from the ocean to allow Hailey to warm up a little (the ocean is averaging 6.7°C / 44°F at the moment), I asked if she'd be able to work below a large erratic balanced on a cliff-edge. After refining the pose a little, we made a small series of images of a couple of poses - then I made a 2 minute exposure (taking inspiration from the movement-focused image of the sea weed), permitting me to blend the two images together into the final image, above.
The last image set of the session saw Hailey returning to posing in the ocean - the sun was moving lower in the sky by this time, and providing long, dramatic shadows to work with - yielding a striking series of images, of which my favourite is the above! The only thing missing was additional models - something I hope to add to the process in upcoming session!
No comments:

A Gymnast in the Studio (Halifax, Nova Scotia)

B_ is the daughter of a former student who has posed numerous times for portrait field trips - she is an excellent model, and really enjoying being photographed. At the most recent portrait field trip I hired her for, it was mentioned that she'd gone to the Gymnastic Provincials - at which point I asked how hard it was to photographer gymnastics competitions...and was surprised to hear that
photography isn't permitted.
Upon hearing this, I had to ask - would B_ be interested in doing some studio photographs of her routine? Since I started photography, I have had a fascination with frozen movement, and have long wished to photograph dance in a studio...an gymnastics have many of the same elements found in dance - extreme motion, grace and beauty. So, about three weeks later, B_, her mother and I met at a studio, and began making a set of gymnastics images.

Working with B_ in the studio was awesome! It took me some time to work out the camera position (right at ground level) and angles (she jumped well above the limit of the 10' tall backdrop), but once that was set up, each time I saw a motion I wished to work with, B_ could repeat it exactly time and time again.
The other reason I asked about photographing B_ was it would give me another chance to explore the potential of motion blur. In 2015 I did some long explore images of dancers, and was quite taken with the results, but as it was part of workshop I was assisting with, there wasn't any room to direct the dancers, or really push the idea in any direction.
With B_'s gymnastics routines, I could ask her to repeat the same motion again and again (with crazy consistency I might add). This went a long way to helping me better understand the potential of the process, and ultimately, decide it isn't a direction to head in. As much as I love the look, and feel it is really quite beautiful, it just doesn't have enough for me to want to invest in pursuing it to the logical conclusion...so thanks to B_, I long standing question has been answered!
No comments:

This morning I spent a couple of hours in the Public Gardens with a student, assisting them with their macro photography. The two of us worked in tandem, with them calling out subjects they were attracted to, and me walking them through the process I using my macro work.
While the morning we were working on was bright and sunny, we managed to take advantage of the directional light time and time again, creating compositions of flowers set against dark shadows, as was the case with the above image of a magnolia flower.
The last composition of the field trip focused on a trio of tulips - one of which had lost its petals. I loved the contrast of the naked stalk and the full, luminous white petals of the other two tulips.
No comments:

As I mentioned in my first outdoor session of 2019, this spring has been wet and cold; as a result, I have done little outdoor work with models, so when Hailey was available, and the weather was promising, I enthusiastically headed to the coast for an evening of photography!

The rocky Atlantic shoreline of Nova Scotia is just a delight to work with, and shortly into the session, I came across a large rock pool perfect for working with - set high above the ocean, the pool was deep black in colour, and created a dramatic division of the rocks around it. Hailey and I worked in the space for almost 30 minutes, working with portraits, reflections, and reclining poses, but the above image, with a brilliant reflection of the sun balancing against the empty pool surrounding Hailey is definitely my favourite.

As the session progressed, the number of spaces in shade increased, and by 1/2 way through the session, we were able to start working with soft light, as well as evening sun. This composition was created looking straight down upon Hailey - as we refined the pose, I asked her to curl up as small as possible, placing her among the lines of the rock below, and the seaweed to the left.
The above photograph is easily the most sculptural image I made during the session - the delicate descriptions of Hailey's figure by the soft light was incredible, and the two tones of the rough granite she was posing upon creates the perfect setting to place her in.


The final images of the session were focused on worked with reflections of the evening sky in rock pools in from the coast; it took some time before we could actually make the images however, as several hikers were out enjoying the evening, and we had to wait for them to head back towards civilization before making the images. By that time, the sky had changed some, but fortunately for us, there were still enough high clouds catching the setting sun's light to create the magic we had seen before. It was a little challenging for Hailey to find spaces to pose within the dark water, but with some care and patience, she found spaces she could work with, and a beautiful set of photographs was born! 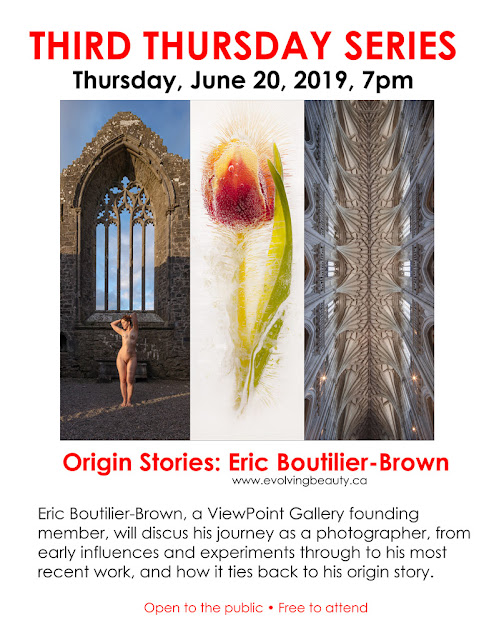