An Indoor Session with Aurora (and the Second Shower Session)

The second session at Aurora's house built on the strengths of the first, but took advantage of the considered approach demanded by my 8"x10" view camera. I was a little concerned about the amount of light in her apartment, but the morning was sunny and bright, and though none of the windows had direct light, a large yellow building across the street acted as a large reflector, and kicked up more then enough light for our needs.
We began the session working on the couch. I had thought the most successful images would have been an 8"x10" negative of Aurora's full figure stretched out. The large negative seemed called for by the delicate tones of the light couch and the darker wall, but when I had finished processing the negatives, it was the infra-red images on the couch that caught my attention. The diffused light combined with the enhanced grain of the infra-red film to render a delicate, romantic image of a slumbering mother-to-be. Normally I don't think of my work as "romantic", but I can't think of another term appropriate for this image.
From the living room, we moved into the dining room, a small space with beautiful light coming in through a curtained window. While the living room had almost no spaced with open, uncluttered backgrounds, the dining room was exactly the opposite, with a beautiful unsullied wall against which we could work. On of the best discoveries of working in Aurora's apartment was the joy of working with off-white walls; all the work I have done over the past two years with white backdrops and sheets had made me forget the subtle separations that can occur with a figure against a delicate grey.
The end of the session was by far the most engaging. Aurora returned to the shower, but instead of my being frustrated with the distortion of the window that took place with the medium format camera, this time I had the 8"x10" Toyo, and was able to shift the lens to the side to maintain the rectangular shape of the window. We revisited the successful images that we had made the week before, using the initial session as a sketchpad for the work of the day. I was unsure if the images could actually be made as the 8"x10" camera needs a proportionally longer exposure (1/4 of a second, compared to 1/15th the week before), but careful pre-focusing, combined with Aurora's leaning against the wall for added stability worked like a charm - the images were all tack sharp, and everything I could have hoped for. By far, the shower nudes of Aurora from this session are my favourite of all the images we have done to date.
No comments:

After two sessions in the studio, both Aurora and I felt it was time to return to available light; I by far prefer to react to an environment, rather than having to create one. Aurora suggested her apartment, which would both put her in a comfortable personal space, and challenge me to react to a totally unfamiliar location. Mid-morning, we convened and began to work, starting with her sitting on a light coloured couch.
One reason why I think most people prefer photographing outdoors is because of the low light levels indoors; this is easily overcome with one of the simplest and most accessible of photographic accessories, a tripod. All of the images of Aurora I made on this day were made with shutter speeds between one eight and a full second, depending on the setting. The freedom to make an image as it occurred to me, as opposed to being restricted by the limitations of lighting is a great advantage that more the offsets the slower pace of working on a tripod.
After we spent some time exploring the possibilities of the couch, I was a little lost as to where to work next, until I caught a glimpse of the light in the hallway, outside the living room. Lit only by a small window on the lower landing, the light was dramatic and strongly angular. Once Aurora moved into the space, things really came together with the window light giving a rim-light to her figure, and enough fill light coming in from the rest of the house to stop her figure from becoming a shadowed silhouette.
The last location for the session was in the shower; when Aurora and I had discussed working in her house, she'd mentioned her bathroom, with a window over the bathtub; I had envisioned working with her in the bath, lit by the window behind her, but when I saw the room layout, everything changed; the window was higher, just perfect for lighting a shower-nude. I asked Aurora if she'd be up for shower images, and she was more then willing to give it a try. As the day was overcast, I had to use 3200 speed film to make the images; even with that speed film, the exposures were in the quarter second range.
The images that happened were magical - the backlighting made the water almost glow, and as it bounced off Aurora's skin, it made a glow seem to appear around her body. The only frustration was that working with medium format (my Mamiya RB) didn't permit me to correct the perspective of the images; the window was off-centre, forcing me to angle the camera into the room, thereby distorting the window shape. All I kept thinking during the session was "if only I had my 8x10 camera". Perhaps next time.
No comments:

The Debut of the "Revelaing Beauty" Documentary Video 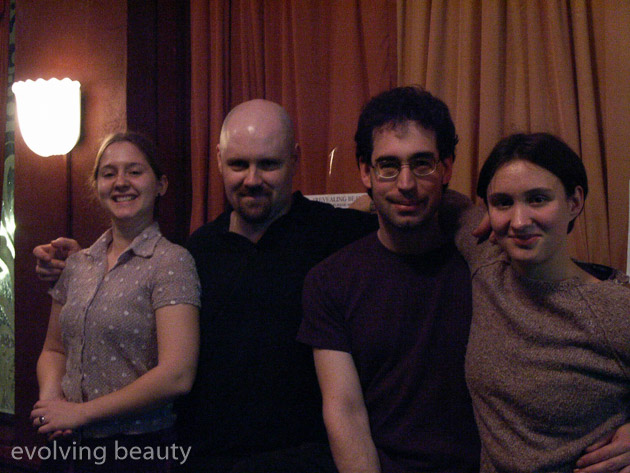 On a rainy, blustery evening, several dozen friends and friends of friends came together to view the debut of "Revealing Beauty", the 25 minute long documentary video on my work with the Nude, produced by Eric Hayes. The evening was a great success, with three screenings, as well as good feedback from both the models (who hadn't seen the final edit before) and the larger general audience. We even attracted a musical celebrity, singer-songwriter James Keelaghan who arrived with Eric Hayes and stayed through the first showing of the video. 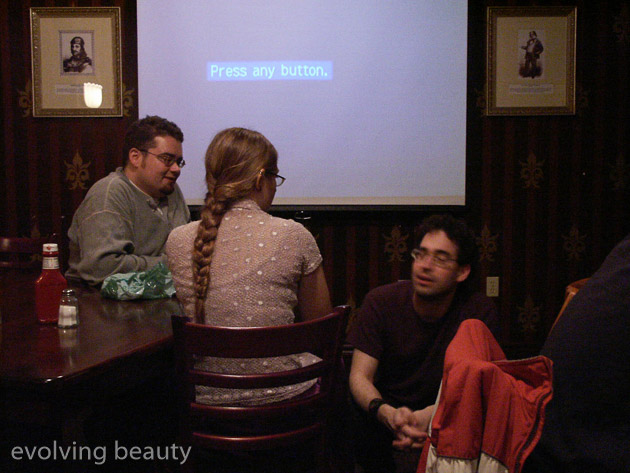 Another Studio Session with Aurora

When Aurora and I first met and talked about the possibilities of documenting the pregnancy, one element that I was particularly interested in exploring was the possibilities of a session with her, the growing baby, and her partner. While I've had the opportunity to work with pregnant models before, I've never done couple images that revolved around a pregnancy.
Generally, for me the studio is a frustrating space to work within; there is nothing but the subject, myself, and the light. It is a lot to ask of a model to be the sole focus of an entire session, and even more so within such an open empty space as a lighting studio, which is why two models are often far easier to work with in the studio (the models have something to cling to, for lack of a better way of explaining it). Aurora's first studio session was more then successful, but I really felt that more could have happened if there had been the introduction of another element, in this case, her partner's hands, to make the images all the more dynamic.
So, when everything came together, the three of us (four if you count the developing baby) descended upon the studio to see what would happen with Aurora and her partner together in front of the camera. The technical approach was pretty much the same as the first studio session with Aurora and me but the added complexity of the second model (second set of hands, actually) added to the imagery was fabulous to work with.
Where the first session was Aurora and I working together to make the lighting and confines of the studio work, this session was almost the complete opposite, with minimal direction from myself, and most of the images arising from the spontaneous interaction between the two models.
The end of the session saw Aurora and I working together on a couple of solo Nudes, continuing the documentation of her changing body. It was verydisconcerting moving from a dynamic where the images happened spontaneously in front of me, to one where I had to return to the standard studio approach of actively working with the model to make the images work.
No comments: