The morning after our studio session, Alexandra and Liam joined me at a friend's house for a short available light session, before they resumed their drive across North America. I had been helping with the renovation of the home and, from my first tour of the house, had known I wanted to work with the pillars in the front hall.

My usual approach to working with the Nude in a specific location is to find a model and then a location but in this case, it was the reverse - I'd known about the pillars for about a month before Alexandra and Liam's arrival but as soon as they indicated their timeline, I'd asked if they'd be available for a morning session, specifically to work with this location.
Fortunately, the two didn't mind delaying their departure, so early on Sunday morning, we arrived at the house, turned up the heat (as it was still in mid-renovation, there was no one living in it yet) and started working. As I had hoped, the morning light was perfect, with soft even light coming through the blinds and lighting the front hall.

More than any other session since switching to working exclusively with digital, I missed having the flexibility of a view camera for this session. To get the angle of view that I sought with the models against the wooden floor, I had to work from fairly high up (on the stairway), which had the side effect of causing the perspective of the room to become seriously skewed.
With a view camera, overcoming this would have been easy, shifting the front lens lower to compensate for the higher angle. With digita,l however, while there are specialty lenses which can do a similar thing, they are expensive, and not really functional with my multi-image stitching technique. All is not lost for digital photographers though, as it is possible with Photoshop and similar programs to digitally correct the perspective in an image and, while this is much more time consuming than making the original image with the corrections as I could have done with a view camera, in the end I could achieve much the same effect, keeping the pillars square and level, while photographing from above the models. 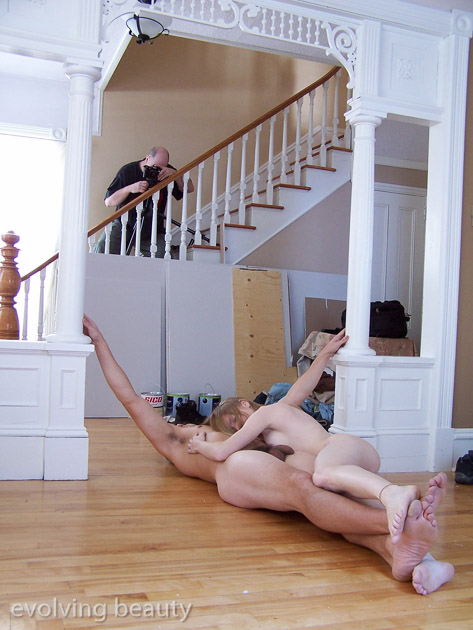 For all that I only had one specific image in my mind's eye when we began (the one of Alexandra perched between the pillar and the wall) between the three of us, we managed to come up with a fair number of other compositions, including some very successful poses working with the two models together between the pillars. If I ever have the chance to work with the space again, I would change some things, but given what we had to work with, I am incredibly pleased with the results.
No comments:

Alexandra & Liam in Moncton I

When I heard that Alexandra and Liam would be passing through Moncton, and would have a chance to work with me, if I could put them up for the night, I was overjoyed. Though they arrived later in the evening, after some relaxation and tea, they were more than keen to model for a short session, before they headed to bed.
Being well after dark, I had to use studio lighting, but I set it up to mimic my preferred back lighting, and off we went. One reason I prefer this approach is that it places the emphasis on the pose and composition, and as opposed to constantly refining and adjusting the lighting, I just worked  with what was there (as one would with natural light).
Alexandra and Liam are such a joy to work with - their comfort with modelling, and affection for each other both contribute to the strength of the images.
No comments:


With the surprising successes of my first serious attempt at photographing flowers, Joy began searching Moncton for a source of orchids which could be pressed into modeling service. As it turned out, one of the local building and home renovation stores carried them and late one afternoon, Joy came proudly in the door, carrying the next model for me to photograph.
It was surprisingly different photographing the second orchid - with the first, there was the naivety that came with working with a new subject; anything was possible, and the successes, as they came, were both surprising and wonderful to behold. In contrast, with the second flower I knew I could make strong images, and the fluid, almost magical process of photographing the first flower was replaced with a much longer session, trying to take the same approach as I'd first used (shallow depth of field, and very close compositions), while avoiding repeating the same compositions with the second orchid. In the end, I did make a number of very pleasing images, but the spark of the first session seemed to be missing. This could be because of the stronger colours of the second flower (I think part of what I responded to with the first flower was the delicate white of the petals), or simply because I was trying to hard with the second flower, but for whatever reason, I think the second session went astray of what initially had caught my eye.

Having worked with a single subject for so long (I've worked with the nude for more than eighteen years now), I think I'd forgotten how difficult and challenging it can be to find a subject that engages the eye, but challenges the lens. With flowers, I can see the potential they hold, but it would seem harder than I'd expected to reveal that potential. I hope over the rest of the winter, and into the spring, to be able to spend more time working with these fascinating and elusive forms, and begin to take the spark that caught my eye and translate it into the visual image.
No comments:

One of the most common axioms in photography is "always have your camera with you"; it is certainly something I suggest when I teach photography but, in reality, I must confess it is something I seldom do, primarily because of how I approach photography, not because it is something I don't believe will improve most people's imagery. On this particular morning, however, I was visiting a friend's house to photograph an antique piano that she was selling, so I had my camera along. My clear intention in having the camera there was to document her piano for potential buyers but then I saw the orchid sitting by the window.
Flowers certainly have a long tradition as the focus of photography but, with a few exceptions, have never captured my eye. With this orchid, however, there was something in the contrast between the white petals and purple centre that really drew me in.

Working with a set of extension tubes and my 105mm lens, I managed to make a whole series of macro images of the flower that really piqued my interest. The shallow depth of field, combined with the beautiful lines and flow of the flower really engaged me and, similar to my Thalamus images from several years ago, these two elements together combine to produce a very pleasing result.
Given how slow the winter months are for me, I suspect the orchid photos could be the doorway to a whole body of work; several people have assured me there are thousands of varieties of these flowers so there is certainly no lack of subjects. It is just the case of finding them and working out the process to build on this session's discoveries!
No comments: