A Visit to the Public Gardens (Halifax, Nova Scotia)

I was photographing this plant (possibly Swiss chard) when I happened to catch sight of how it looked when the sun passed through it! Moments later my camera was upside down, I was lying on the ground, and within a minute, the above image was made!
After the brilliant colour of the first image, I really enjoyed working with this pale flower, carefully placing the bright yellow on the top left, and the delicate lines of purple on white at the bottom left.
I am absolutely certain someone placed this petal in the centre of this spray of leaves - but it wasn't me. The contrast in colour between the magenta of the flower petal, and the rich green leaves is just perfect.
No comments:

A Field Trip to the Dingle (Halifax, Nova Scotia)

The ten story high Memorial Tower was built at the Dingle to commemorate the 150th anniversary of the establishment of representative government in Nova Scotia, in 1758.
At the heart of the tower is a lovely iron stairway; with so many lines, curves and different plains, it was hard to know where to begin with the structure, but once I began looking at it through my ultra wide 17mm tilt-shift lens, everything came together.
At the end of a field trip this morning, I spent 40 minutes photographing an iron stairway; essentially I started at the bottom and worked my way up. By the end, I had my camera leaning out over the stairwell (the joy of having a good tripod) pointing almost straight down; this, combined with pushing things a little with my 17mm tilt-shift lens, gave me a number of really pleasing images.
No comments:

I can never tell what will catch my eye during a field trip; as I give many of these every year, and repeat the same locations for most, I tend to look for the subtle more than the obvious. In this case, the riot of flowers was immediately engaging, and I quickly settled on working with a long lens and large aperture to create a blend of in and out of fucs.
The shallow depth of field approach continued through the field trip, as I found singular flowers (like the above day lily) to isolate against the riot of colour around them.
The best images of the field trip came right at the end, as I was heading to my car, and home. A thick wall of fog began to move across the harbour, shrouding the bridge, and creating a magical monochrome scene.
No comments:

The third session with the two models from the US took place on the second morning of their visit. Under a bright blue sky, we headed to the coast, and spent a couple of hours working in one of my favorite places to photograph.
Though much of the photography we did was focused on working with the ocean, I did make some images set in the grassy shore, set against the wall of granite. In infrared, the beautiful tone of the back is a great contrast to the grasses around the model. 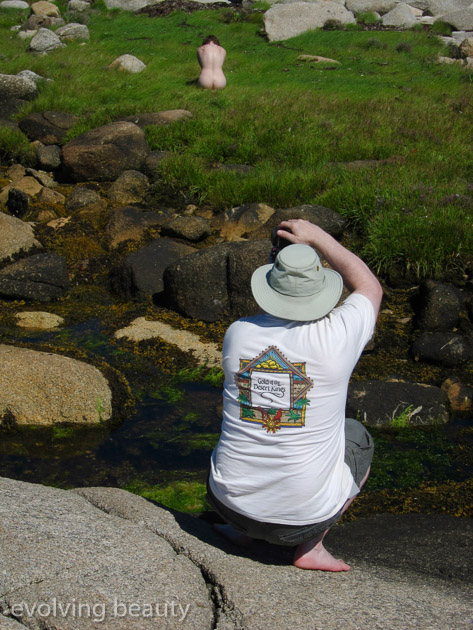 On the way back to the car, we stopped to work with some of the glacial erratics which are scattered on the wild Atlantic shore near Halifax.

Erica and Venus in a River (Ingramport River, Nova Scotia)

I usually shy away from working in water with direct sunlight, finding the harsh shadows and faster (relatively) shutter speeds frustrating. In this case, the two models were only in the province for two days, so we didn't have the luxury to be selective about the weather.

With this in mind, the above image has to be one of my best working with direct sunlight in a river.
Made at our second location for the day, this was produced well into our time at the river, but was more about the water as a surrounding, than an environment. I was happy to follow Erica’s lead, in regards to how she was working with the space.
Apart from the occasional standing portrait, I seldom make images around water that are not about surface or motion; for this photograph however, Erica was convinced the branch hanging over the water would provide us with an image...and she was right!
No comments:

I have always enjoyed the simple beauty of standing poses - and the wonderful light falling upon Venus through the windows only helped.
I gradually worked towards this image, with first Erica, then Erica and Venus in the window. Only at the very end did I experiment with Kyla in the mix; the result was surprisingly fast to come together, with Venus (in the centre) holding it all together.
Working two models into a location is often a challenge, but for this composition, it was relatively easy - I took the line of Erica’s back as the cue, and asked Venus to mirror it with her body.
No comments: