It's more than twenty years since I first realized how important hands were to images of lovers; it is a true today, as the day I realized it.
One of the mail reasons I moved from Nikon to Canon in 2008 was for the 85mm f/1.2 lens...and while I hunger after the resolution of the 36mp Nikon cameras, I wouldn't give up the 85mm (or the 17mm T/S) for it.
The direct passion of this image of Jessica and Ryan comes through really well in this image.
No comments:

Miranda received a pair of kittens recently, and I just had to go over to photograph them!
Savannah cats are huge, even as kittens...but the were indubitably kittens!
Nothing like a paper bag to entertain a kitten!

My apartment in Halifax faces a strange direction; I can see niether sunrise or sunset, but occasionally, I get a wonderful view of side-lit clouds at the end of the day.
No comments:


As we waited for the final luggage to arrive to be loaded on the plane, I was amused at the relaxed attitude of the Dublin Airport worker.
Having flown to Europe 5 out of the last 7 years, I always prefer the flight home...both because it seems easier on my system to fly during the day (as opposed to not sleeping on the plane at night), and because it is much easier to photograph out the plane window during the day. 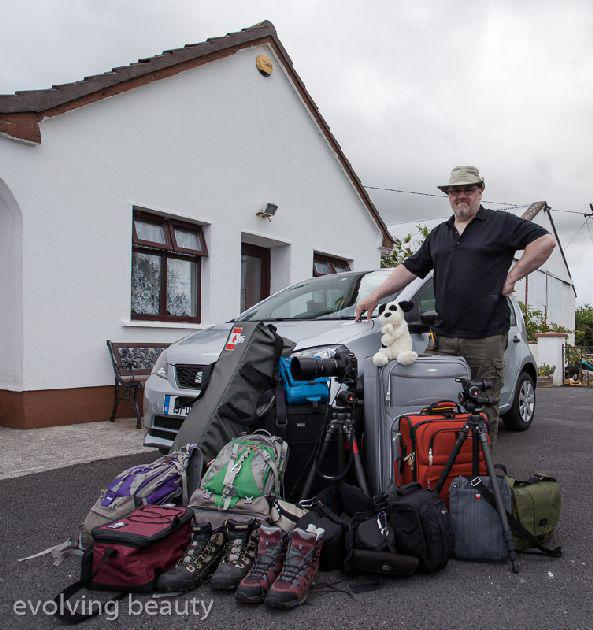 A photo of "the stuff" before the car is packed and the drive back to Dublin begun. Patrick, the white and black dog on the large suit case, was our mascot for most of the last week of the trip.
The drive back east was carefully planned to include two major site visits; the first, the ruins of Roscommon Castle, was quite magical; the day was bright and sunny when we arrived, and an hour later, as we left, the mother of all rainstorms was threatening on the horizon.
The final location to be photograhed on my first trip to Ireland was Trim Castle, to the North-West of Dublin; I wished there was more time to photograph it, but with the clock ticking on the departure, the visit was short and sweet.
No comments:

One of the best parts of this day was a visit with two horses; we'd taken a wrong turn, and were returning to the main road, when I saw a beautiful horse in a field; thinking I'd get a good photo or two, I pulled the car off the road, and got out...twenty minutes later after lots of nose-patting and grass-pulling, we finally said goodby to these two wonderfully social beasties.
The drive through Connemara is freqently within sight of low, rolling mountains...in this case, I photographed them from a peat bog, complete with cut turf drying in the sun.
The last location visited on this day was Aughnanure Castle, on the way back south. A fine example of an Irish castle, it is a blend of a fortified tower and castle grounds.
No comments:

One of my main reasons for choosing the accommodation location for the third week of the trip was its closeness to the the Burren; the irony of course was that during the third week, a grand total of 1 day was spent exploring it. If I ever return to Ireland, this oversight will be corrected.
During a stop in Doolin to visit local shops, I drove out to the pier and went out to photograph the wind-whipped shore. As I got out of the car, I saw this crow having a hard time keeping on the wire...an indicator of just how windy it was.
It actually took two visits to the Poulnabrone dolme to make this image; the first was just too wet to facilitate quality photographs (the wind was as much an issue as the rain), but on the drive back through the area, a second stop provided the perfect opportunity to revist the subject.
On the way back from the Burren, quite by accident, we came across Kilmacduagh Monastery, and just had to stop. Sadly, the site was closed for the day, so there was no possibility of photographing within the ruin, but it was quite beautiful to photograph all the same.
No comments:

The first destination for the day was Quin Abbey, which turned out to be a complete disappointment; the OPW (The Office of Public Works) employee at the entrance wouldn't let me in with "that big camera", which was ironic as other OPW sites were totally welcoming, and accommodating. So all I manged to create at Quin was a couple of distant images like this, and a few details of the outside, made as I walked around the building.
The real focus of this day was a visit to Limerick, which began with a visit to King John's Castle. A richly interpreted site, I photographed as I walked through the castle, but it was this image of the outside, made as I was walking across a bridge, that tells the best story of the building.
I was immediately drawn to this storefront in central Limerick; something about the contrast of the bright highlights on the black painted wood an metal really appealed to me.
On the way home from Limerick, a stop was made in Ennis, to visit the remains of Clare Abbey.
No comments:

The Ross Errilly Friary is a medieval Franciscan friary and among the best-preserved medieval monastic sites in the country. Though usually referred to by locals as "Ross Abbey," this is not technically correct as the community never had an abbot.
The grounds of the abbey also contain a monks’ fishing house, probably built in the 15th or 16th century, on an island in the River Cong leading towards nearby Lough Corrib. The house is built on a platform of stones over a small arch which allows the river to flow underneath the floor. There is a trapdoor in the floor in which the fish may have been kept fresh. According to local tradition, a line was connected from the fishing house to the monastery kitchen to alert the cook to fresh fish.
Cong Abbey is a former Augustinian abbey mostly dating to the 13th century and described as featuring some of finest examples of medieval ecclesial architecture in Ireland.
The Harris hawk is a medium-large bird of prey which breeds from the southwestern United States south to Chile and central Argentina. This was is from the hawking centre at Ashford Castle, Ireland.
Ashford Castle is a medieval castle that has been expanded over the centuries and turned into a five star luxury hotel near Cong on the Mayo-Galway border, on the shore of Lough Corrib in Ireland. It is a member of the Leading Hotels of the World organization and was previously owned by the Guinness family.
Connemara is a district in the west of Ireland, the boundaries of which are not well defined. It is closer in feel to western Scotland, especially with the lack of stone fencing on the roadsides.
No comments: