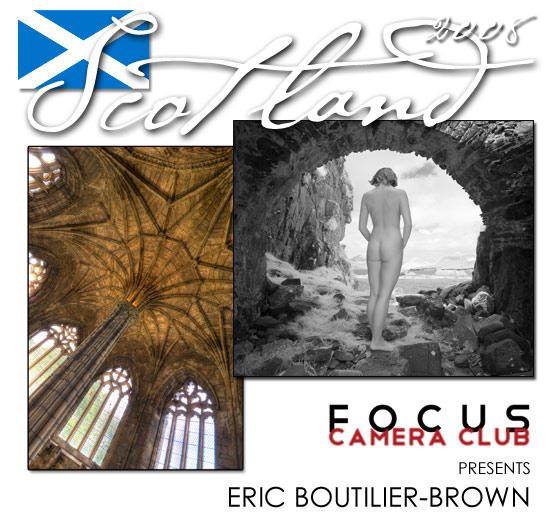 On Thursday, January 7th, 2010,I will be presenting to the Moncton Focus Camera Club, talking about my work produced in Scotland in 2008. The meeting begins at 6:30 at the Université de Moncton Campus, Rémi-Rossignol Building - Rm. D102.
No comments:

A Tulip and a Rose

Purple, Yellow and Orange in Ice

This image was included in the 2010 exhibition `Frozen Light` which was displayed at ViewPoint Gallery, in Halifax, Nova Scotia.

One of the best things about visiting Moncton is the opportunity to work with Tanya. For this visit, early in the New Year, working outdoors wasn't an option, so I met with Tanya at her apartment, and we spent several hours working together with the afternoon light. The portrait above, created early in the session, was made by the window in Tanya's bedroom - lit as much by the light reflecting off the New Year's snow as the overcast sky above.

Though we began working in the bedroom, the light wasn't great, so we quickly moved to the living room, which had a double deck doors - perfect for lighting the Nude, especially when covered with sheer curtains. The large glass doors provided the perfect diffused light, and was just fabulous to work with. The background proved to be a challenge, but working with large apertures, and keeping Tanya's pose against a distant corner without furniture minimized any distractions.
The last set of images I made were a series of portraits, experimenting with a freestanding reflector; I normally don't use a lot of reflectors in my work, but I brought one along on this session, and decided it'd be worth trying, to see if it contributed anything. I have the above image with and without the reflector (the image above is with it), and normally I would have selected the first image, the one without the reflector. Ultimately, I prefer the stronger contrast of the single large light source, to the same image with a reflector. So why show the second image? Because while I don't like the lighting as much, Tanya's pose is SO much stronger than the first image...so the weaker light, and better pose wins the day.
No comments:

This visit is my 4th annual pilgrimage to Peggy's Cove to photograph in the New Year. This is the most photographed lighthouse in the world…though it is usually photographed with a beautiful sunset behind it…but in the winter, sometimes you can’t even see the sky!
The light dusting of snow (accumulating as I was photographing) made for some very subtle compositions, like this one of a sheer rock face...the shapes upon it are simply carved out by the wind shadow of snow.
No comments: