There are multiple stages to post production, and while they are seldom carried out in isolation, I've decided to blog about each part separately, to provide some insight into my personal process, and how it's being applied to the 10,000 images created during the Ingrid portfolio project.

While culling is undeniably the primary focus of the early part of port production, inevitably, as I work through the cull, I inevitably come across images which need a quick processing fix. This is often just a white balance adjustment, or minor tone correction, and I will take a moment during culling to make the fix. In other cases however, the issue is larger, and will takes a significant amount of effort to take an image from the camera and create the image I'd seen in my mind's eye. This level of image processing takes a back seat until the bulk of the culling is complete; at that time, my focus shifts, and more and more time is spent processing images, until this become the dominant focus of the post production process. By the time the final culling decisions are made, each and every image remaining in the Work in Progress catalogue has had at least some image processing applied.

Except when noted, all my image processing is done in Adobe Photoshop Lightroom; unlike the culling however, I don't do any image processing (beyond the occasional crop) from within Lightroom Mobile on the iPad Pro, as it is not colour profiled, or used in a controlled environment  (my desktop computer is both colour profiled with a Spyder, and within a well designed work space with no natural light, neutral coloured walls, and appropriate lighting. 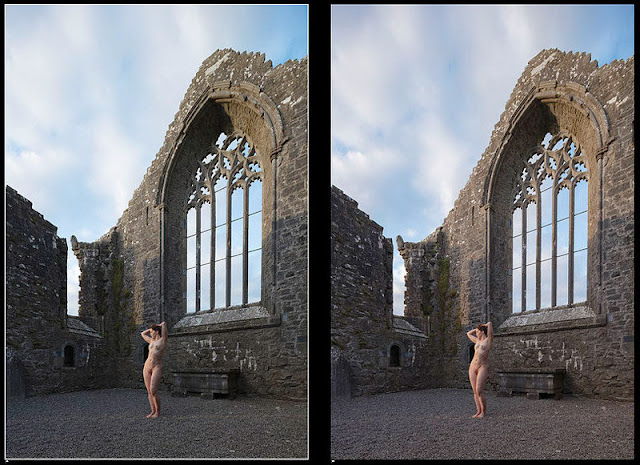 In some cases (above), processing can be as simple as a white balance adjustment (from 5150K to 5500K, +10 M) and a minus highlight and minus blue luminosity adjustment to regain the tonality in the sky. In a further revision (not shown here) I retouched out the reinforcement bars from the windows behind Ingrid.

Besides the obvious crop, the above processed image has a much warmer white balance, and some local adjustments to the shadow tones of the rock and Ingrid's figure upon it. The crop was added to strengthen the horizontal quality of the image, and remove some of the weight from the lower foreground.

For the majority of images made in colour, I also made a virtual copy within Adobe Photoshop Lightroom, and converted it to monochrome. In most cases, this is simply a B&W conversion done manually in Lightroom, adjusting the sliders as needed. In some cases, however, local adjustments were needed to adjust the image tone. In the above example, both the foliage around Ingrid, and Ingrid's hair were lightened to give the result I was seeking. 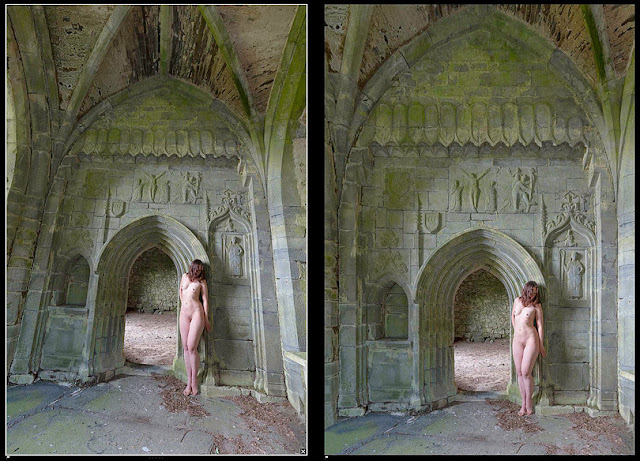 The most common advanced processing technique applied to the images made in Ireland was perspective correction. While I had my 17mm tilt-shift with me, in many cases that wasn't the right focal length for a given setting, so I had to use other lenses (predominantly the Canon 16-35mm f/4) and then correct the distortion afterwards; the above image is a good example of how well the obvious distortion of an ultra-wide lens can be corrected using a program like Adobe Photoshop Lightroom. 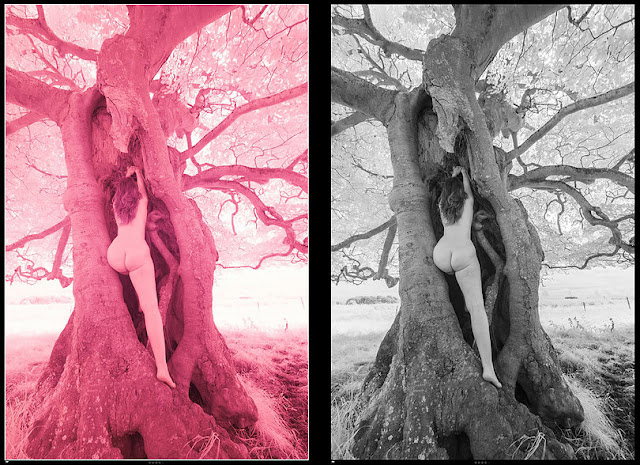 Another processing step that was widely applied to images was a B&W conversion applied to all the images made with my infrared converted Canon 5Ds; the above example shows a comparison between an out-of-camera image (with a daylight colour balance) and the same image with my standard infrared conversion applied. I should be noted that this processing is a Default Development Setting applied on import, but it is one of the best example of how necessary image processing can be! 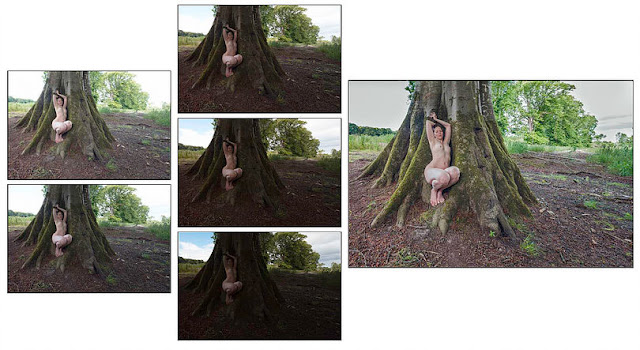 An even smaller number of photos received even more intense processing - these images are made up from multiple source files. For 120 of the final images, like the above photo, multiple images with different exposures were blended together to create a final photograph with a much longer tonal range than possible with a single exposure. This is done either in Adobe Photoshop Lightroom using HDR Photomerge, or in some cases, in Adobe Photoshop, using layers and masks to manually blend the images together 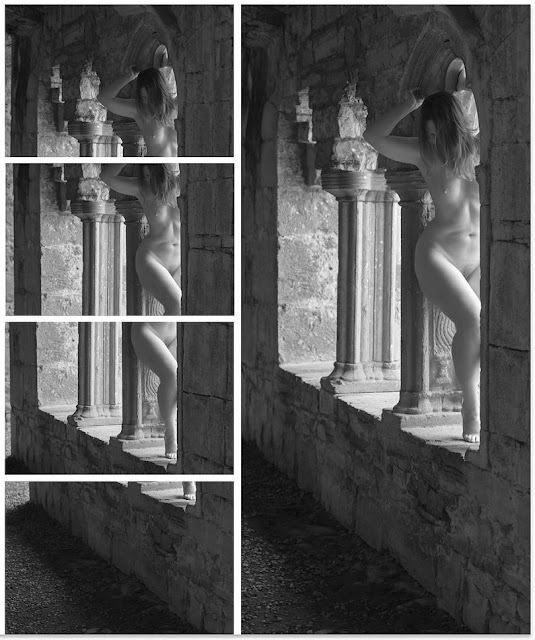 In another 41 images, like the above photo, the multiple images are stitched together (like puzzle pieces), to make a larger image from smaller parts. I did this in either Adobe Photoshop Lightroom using Panoramic Photomerge, or in some more challenging cases, in Adobe Photoshop, using layers and masks to manually assemble the images together.

This is a technique I have used since 2003; initially I utilized it to increase image resolution, but with 50mp images coming out of my cameras, I use it primarily when I need a wider lens angle, when I know an image will be a very narrow aspect ratio (as in the above image) and wish to avoid cropping, or, occasionally, when I think even 50mp isn't going to be enough resolution to print as large as I'd like. 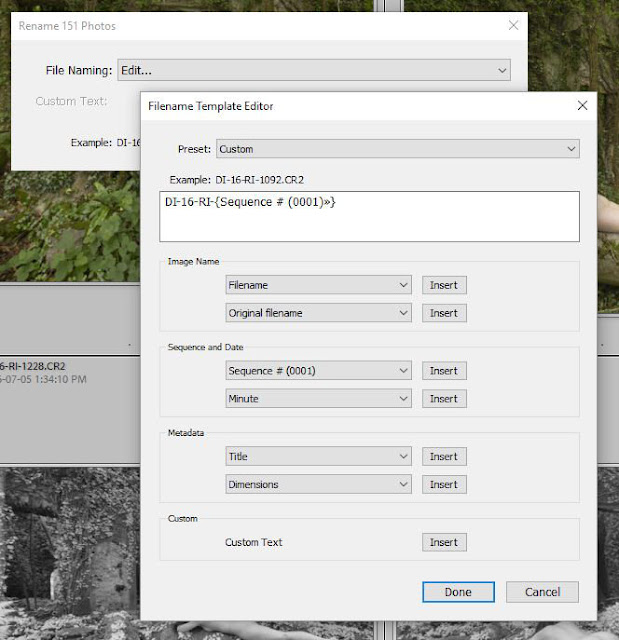 Once all the images have been processed (it is important to realize this is a quick, basic processing - fine image processing is a much more involved process that happens later in the timeline), I do a final review and cull out any additional deadwood, or any images that ended up having serious issues that couldn't be corrected in processing.

At this point, I rename all the original files, giving each a unique file name, as opposed to the generic one assigned by the camera. I use a system established in my early film days, beginning with the forma (DI for Digital Image), the year (16), and because this is a special project, an initial for the project - in this case, RI for Republic of Ireland. This sequence (DI-16-RI-) is then followed by four digits, permitting each image made during the project to be found easily, simply by knowing the file name. 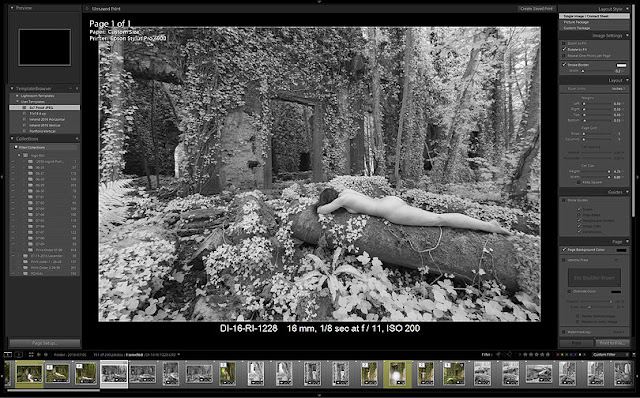 With the files renamed, the next step is to create print proofs. Using the Print Module, each image is to be printed to a JPEG file, creating a document that will print to 5"x7". Using a black background, I add a small 0.1" border around the sides and top, and 0.3" border on the bottom, where I add the file name and basic photo information. 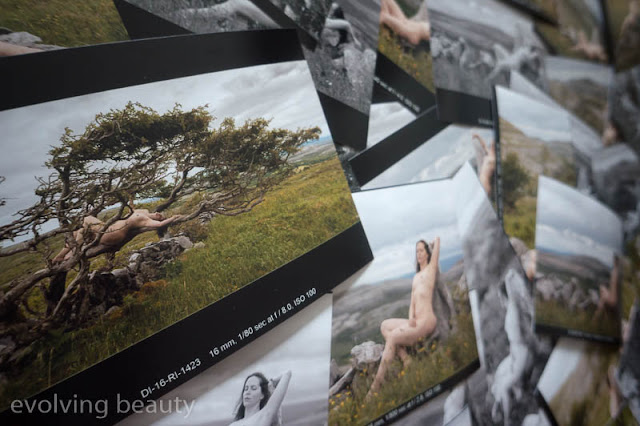 The primary purpose of the proofs is to permit the images from Ireland to be reviewed independent of technology. It is a real pleasure to simply leafing through prints, and while computer screens and iPads are nice, there is nothing like laying out 60 or more prints of a table, and being able to move them around with ease. 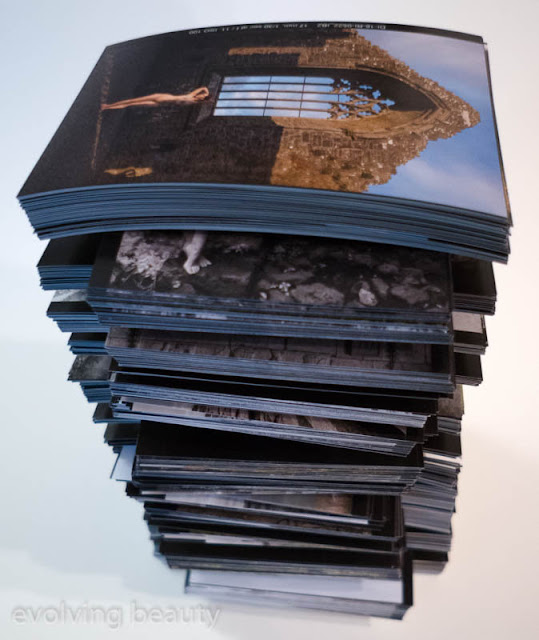 A stack of 1,300 5"x7" prints is quite impressive to see - above they are divided by location, to give some idea of the number of sessions I have to work through to narrow the selection down to the final portfolio. For the next month or more, these proofs will be the focus of much of my attention, slowly editing the 1,300 prints down to the final 12 to be included in the portfolio...for each image kept, over 100 must be set aside! 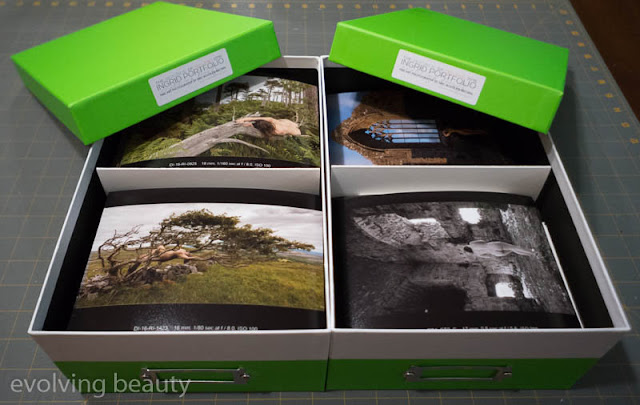 For storage, I have kept the proofs divided by location (30 in all), separated them with a sheet of 2 ply acid free mat board and placed them in photo safe storage boxes (I chose green boxes both because they suited Ireland, and will stand out from the rest of my boxed film and prints, which are in deep maroon boxes.
No comments:

Last week I was interviewed about the Ireland Portfolio on Today FM, a national radio station in Ireland...and today I learned that the interview is available online - if you go to Today FM and advanced the "Listen Back" to 5:54, you will hear the interview!

Sadly, no photos on the radio!
No comments:

Feature Article in The Irish Sun 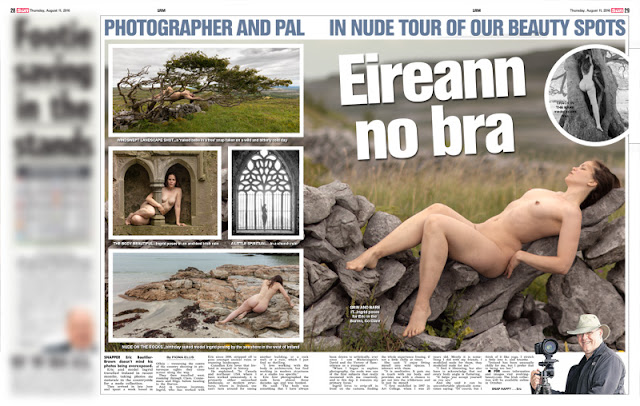 I woke up this morning to lean that a feature article about my work in Ireland with Ingrid was published this morning in Dublin, in The Irish Sun newspaper. Above is an image of how the article appears in the paper. 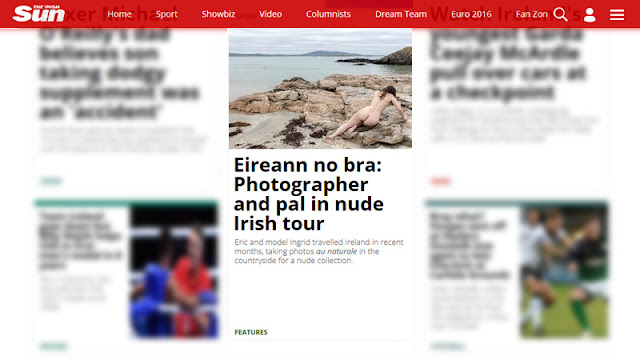 The title of the article (Eireann no Bra) is a play on words, as Éirinn go Brách translates as Ireland forever!  Below is the online publication of the article, which features uncropped versions of some of the images printed in the paper! 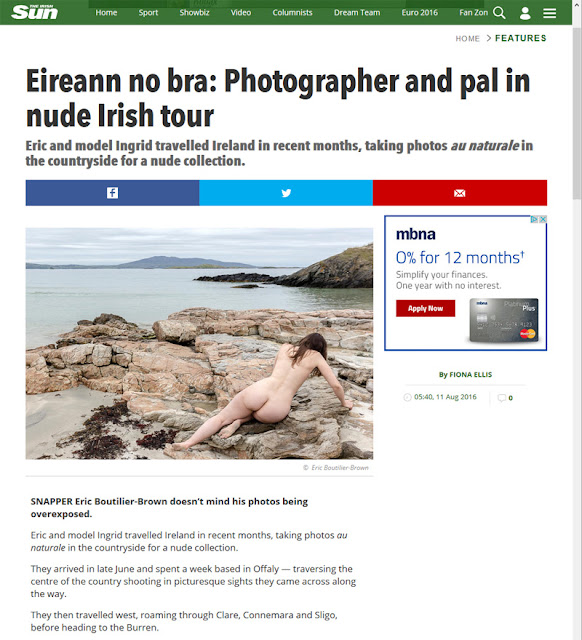