The afternoon of the second day of darkroom building was a little ominous - the dark sky seemed to threaten rain, so once the four walls were up and connected, I covered up the building, and headed off to make some photos.
After a little bit of a debate, we settled on Pennant Peninsula, where I had worked before on July 1. Like many of the sessions this summer, the session was relatively short, with the light failing before I had finished exploring all the possibilities presented to me.

Though I began working on the rock point where I had photographed two months before, it was when we moved off the rocks and onto the beach that the best images of the afternoon were made.
With the sun moving lower in the sky, and the cloud cover clearing, the quality of the light was swiftly becoming more and more golden, as the sunlight raked through the clouds. The model was already in a tidal pool, and I realized that the setting sun could be framed perfectly by her torso. Working swiftly, I made three images, two with the view camera, and one with a 35mm camera.
The beauty of the evening light reflecting off the water, surrounding the swelling chest and stomach, totally drew me in when I saw it through the camera's lens. I made two black and white images working with the reflected light that are every bit as strong as the colour ones. Where the light looks golden warm in the colour images, in the black and white images, it transforms the water to mercury, giving the stomach a sculptural quality.

Just as the water nudes of 1996 began my exploration of this facet of my work with the Nude, these few images have set a spark to a new direction. Where I began by exploring moving water/blur nudes, I now plan to explore reflections and transparency - a whole new aspect of water nudes previously untapped.
No comments: 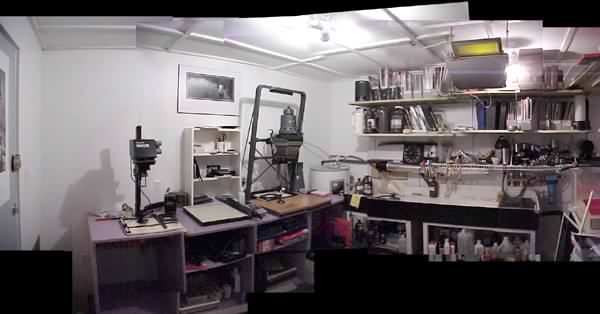 After four months of planning and designing, I finally began construction of my darkroom on the Labour Day weekend. With the help of three good friends, we started working at 10:00 AM, and wrapped up the floor and first two walls by late afternoon.

Designed with a tight budget, the darkroom was planned to meet a number of very specific needs. I wanted it to have two enlargers, with room for a third, to be spacious enough for two people to work in comfortably, and to meet the requirements of historical processes printing (Van Dyke Brown, Cyanotype and Gub Bichromate). The darkroom is the third I have designed, but it is the first to be built from the ground up as a free-standing building solely devoted to photography.

The second day of construction was pretty much a solo effort, but I got the other two walls up and a tarp over top as rain threatened.

The new darkroom makes a major change in the way I work. It will finally allow me to print up much of the work from the past two years. 1995 was the last year I had a darkroom at home, and the difference in my creative process between then and now is considerable. Before, I printed many of my images to explore their potential; for the past three years a computer has served that purpose. It will be very enjoyable to be able to do proof prints of my work. The majority of images displayed on this site from 1995-8 has never been printed larger than a contact print!
No comments: