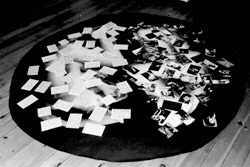 The final project consisted of two larger-than-life foetal nude self-portraits arranged on a black circle in a yin-yang fashion. Each nude was covered with 4"x6" pieces of either image or text. It was supposed to represent the two aspects of memory - with some of the text or photos blank or black, representing lost or concealed memories. Though I had hoped to use the class to reintegrate my personal work into my school work and failed, I did produce a reasonably successful final, which, given my frustration with the college at the time, was a success.
No comments: