I'd first worked in this location a week or so earlier with Nadine, and as I was so pleased with the results that I was keen to return - and Ingrid being always up for working with water was the idea model to bring to the location.

We began with some dry poses, working above or beside the river, with mixed success - the challenge is the disconnect between the figure and the water - the element that makes such lovely images when the body is directly interacting with the water is totally missing when the two are separate.
As soon as Ingrid moved into the water, the session started taking off; the light was challenging, with dappled sunlight coming through the trees, and creating bright highlights on the river, but even with that, the photographs we made were really pleasing, in contrast to the challenge we had when working with Ingrid out of the river itself.
Somewhat surprising (given it was so successful with Nadine) I didn't make a lot of infrared photographs during this session - I suspect it was because I spent so much time trying to address the challenging lighting that the I just plain forgot most of the time to make the infrared versions of poses.
No comments: Links to this post

Ingrid Poses by a River

I don't often work in new spaces around Halifax, but Ingrid was really interested in working along this river (it wasn't really warm enough to do full immersion images), so I headed into the unknown with her.
Almost as soon as we found the river, we came across a larger pool, where the surface of the water was patterned with white foam highlights; I suggested that Ingrid work on the far side, where moss-covered rocks met the river. After some experimentation, she found a pose that worked well with the lines of the rocks around her. In the end, Ingrid and I made a whole set of images, each of a different pose, all revolving around the reflections of her body in the water.
As we worked with the river, some of the challenges of not know the space became apparent; we initially headed up river, only to find it narrowed and eventually became too small to work with. Admitting defeat, we retreated downriver, and ended up working in almost the same space, this time on the closer shore of the stream. Though the pattern on the surface was still the focus of the image, working with colour, and with Ingrid on the closer side of the river helped us make a significantly different set of images.
The session came to an abrupt ending just after we began to make a set of portraits of Ingrid perched on a moss-covered rock in the middle of the stream. I used a longer lens to provide a shallower depth of field, and then stitched the result together to provide a wide field of view. Unfortunately, while we were working, a passer-by came upon us (unbeknownst to me, there was a popular walking trail right by the stream) and got quite upset. After a quite vocal objection to Ingrid's undity, he stormed off with cell phone in hand, insisting the police were on their way. Needless to say, Ingrid and I packed up, and headed home, sadly leaving a great number of potential images behind.

In all honesty, this was perhaps the 3rd time, in almost 20 years of working with the Nude that we have been interrupted, and forced to end a session because of an unexpected interloper.
No comments: Links to this post

When Lavender contacted me about working together, we both admitted that it would be challenging to get in more than a couple of sessions before the fall turned too cold to work outdoors. Luck was with us however, as the first date we both had free turned out to be sunny and warm. We headed to the coast, looking for sun drenched rocks and rich environments to work in.

The first set of images we created worked with the sea of seaweed present due to low tide. I used a long lens to restrict the background to just the ocean, and was really pleased with the results. If it was 2 months earlier, Lavender might have been able to work within the water itself, but in late September, that was not an option.
Almost all of the rest of the session was spent exploring the blend of the body and stone; there is a really nice contrast when skin is placed on granite, and when infrared photography is added, Lavender's luminous smooth skin was a perfect counterpoint to the rough textured rock below her.
The final set of images were made with a lower viewpoint, setting Lavender's body against the sky. The angle I photographed from was important in this case, as the shadows from the harsh sunlight had to be considered, and placed so they would be pleasing, as opposed to frustrating.
No comments: Links to this post

The day after an indoor session to test the waters, Nadine and I set off to work outdoors; as it was mid September, I opted to head to a woodland space, hoping to work with infrared and the magical luminosity it gives to foliage. After spending more than an hour the previous night posing indoors, Nadine jumped in with two feet, and minutes after we'd arrived, had climbed a tree and found a pose that integrated her figure with the landscape well.
A second set of photographs we made was with Nadine lying in a bed of ferns; the beauty of infrared really shone here, with Nadine's already pale skin made even more luminous by the soft evening light in the forest, almost matching the ghostly white of the ferns around her.
This is one of the strongest water images I have made in years. The location was one I’d driven pased many times by car, and always wondered about. It turned out to be almost perfect - shallow, swift moving, and easy to get to. Nadine’s idea of arching back with her hands together pulled an already strong image into a beautiful blend of body and location.
No comments: Links to this post

Nadine contacted me, and let me know she'd followed my work for years, and finally had decided to approach me about working together. Though she lived in Moncton (where I had lived form 2003 to 2006), Nadine was expecting to be in Halifax soon, and wanted to know if we could meet up, and if all worked out well, work together.
There was nothing but positive connections when we first me, and that night, Nadine and I made our first images together. Using studio lighting, I made a variety of images, starting with some portraits, but quickly moving to Nadine posing on a mirror, returning to a theme I'd first discovered in 1999.
For a model's first session, this evening went really well; though Nadine had not modeled nude before, her familiarity with my work, and personal interest in the images and the process really showed, and helped us make some really strong photographs.
No comments: Links to this post

Every now and then I get the opportunity to photograph something really outside my comfort zone, photographically speaking. When a night of belly dance performance was planned by a friend, I immediately asked if I could photograph it, and days later found myself in an underground venue, photographing belly dance for over an hour.
In some ways, live dance photograph has a lot to do with concert photography, so it was not totally foreign, but the motion and rhythm of the dance was completely new to me. The easiest way to compensate for this was through volume, and over the evening, I fill almost every memory card I had...in JPEG format, in order to make the most of my resources. Because of this choice, unusually I adjusted most of my cameras image settings (White Balance, sharpness, contrast etc) to make the best out-of-camera images possible.

Brittany Model at the Coast


Though Brittany's first session was indoors, her real interest in working with me was in modeling outdoors, so on a beautiful sunny day in early September, she and I headed to the coast. Direct sunlight is not my favorite kind of light, but when a model is available, I'd rather make images than wait for better light, when the model might no longer be around.
The vast majority of the session was spent working on the tide line, taking advantage of how bright and delicate the seaweed looks when photographed in infrared. The hard shadows of the sunlight was challenging to work around, but with careful attention to posing and camera angle, we managed to make a number of photographs that really shone.
Shortly before we ended the session, Brittany and I walked inland a little, seeking out a setting in which would work well for portraits. Fortune shone on us as we found a grass-filled clearing which provided both some rich reflected light, and a nice foreground and background to set a portrait within.
No comments: Links to this post

Lymari upon the Glacial Barrens

While Lymari and I have worked together over the last couple of years, this was the first time we'd headed out to one of my favorite places to the photograph - the glacial barrens that run along the coast to the south of Halifax.

The walk out to the shore is littered with glacial erratics, which has in turn created a bizarre landscape of low scrubby brush with dramatic rocks emerging from the greenery. In infrared, this is a little less stark (with the lush foliage becoming lighter, and closer in tone to the granite rock; in this case, however, the western fact of the rock by Lymari was dark with lichen, creating some contrast with the body above it, and the landscape that surrounds it.
The bleached granite rocks that abound in Nova Scotia are one of my favorite settings to work with; in this case, the luminous quality that the infrared camera gives to the rock just adds to the magic of the setting.
I was really quite excited when I made the above image; I've been working with ultra-wide lenses for about a decade now, and really love how they can add dimension to an image; in this case however, the complexity of the space was really used well with the extreme wide lens. The rock pool in the background, and the deep shadowy crevasse directly below Lymari's head provide a perfect frame for her sun drenched figure.
No comments: Links to this post 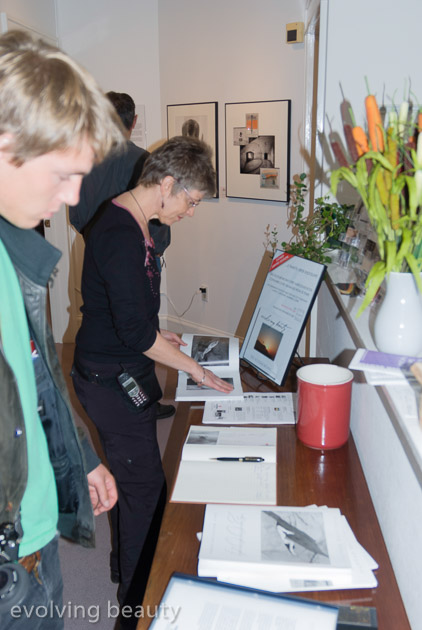 Evolving Beauty, an exhibition celebrating 20 years of my photography (1986-2006), opened today at ViewPoint Gallery, on Gottingen Street in central Halifax. 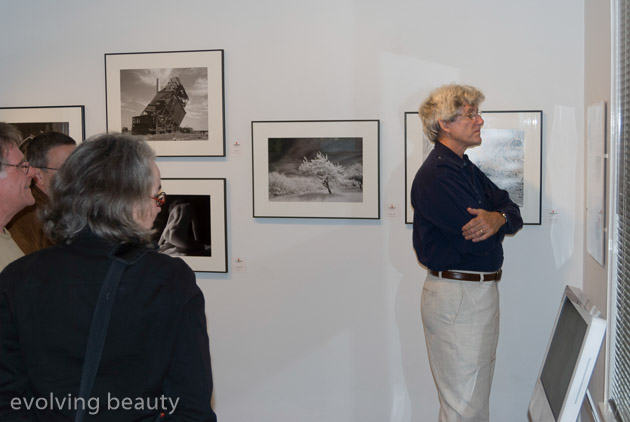 The 35 images in the exhibition span my work with the nude, architecture and landscape, and thought he exhibition is primarily film images, some digital images (including infrared images are included, representing more recent directions in my work. 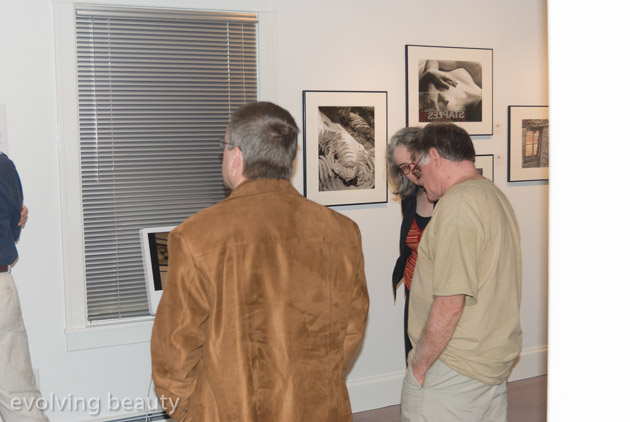