Ingrid Returns to the Frozen River

Shortly after our first session experimenting with winter nudes, Ingrid and I returned to Dawson Brook to try to build on the earlier images. This time, rather than spending all our time and energy getting to the bottom of the falls, we decided to stay at the top, and work with the brook itself.

This image has a much more traditional approach than the results from our first session. While the pose looks cold, Ingrid is actually lying on her clothes, and not directly upon the ice.
Part of the question of this new direction is "what should Winter nudes look like?"; while my first inclination was to work with water and ice, there's no denying that the above image, of snow covered moss, speaks of winter just as well.
The final images of the session were made at the very bottom of the falls, looking up stream at the show and ice that line the river. After I made the stock images of the setting (six rows of 6 frames each), Ingrid experimented with a number of different poses in several spaces along side of the river. With the distance, and the noise of the river, it was challenging to communicate, but somehow we managed to get things done.
No comments:

Ingrid Models on a Frozen River

For several years, Ingrid has expressed interest in doing some modelling with ice and snow, but this was our first real attempt at working with winter nudes. After a week long cold snap, a day with mild temperatures (6 Celsius) arrived, so we headed out to Dawson Brook to see what the winter presented in the way of inspiration.
As we walked into Dawson Brook, we stopped several times to made images, including the above infrared image of Ingrid with ice. I'd thought the infrared camera might work well with the snow and ice, but it turned out to be less than pleasing in most cases, with the above image being a notable exception.
Ingrid only headed out onto the ice after I had thoroughly stomped on it - if anyone was going to fall into a freezing river this session it would be me. This setting had exactly what I sought - a lovely shelf of ice for Ingrid to model on, and a full waterfall of running water to contrast the ice in the final photograph.

After disrobing, Ingrid perched on top of her socks while we experimented with the pose; after a couple of non-starters, we made a handful of pose variations, the best of which is above. After finishing the colour images, I moved closer and made some hand-held images in both colour and infrared (which were not very successful).
I have such a dislike for photographing on bright, sunny days that when Ingrid suggested an ice-nude session, all I could think was that if I was lucky, I might find some ice in a shady spot. Little did I know how important the direct sunlight would be to the images on the ice shelf - the delicate highlights on Ingrid's torso really sing in the above two images.
No comments:

The Flowers in Ice Explorations Continue

After my early successes with flowers frozen in ice, I decided to continue my explorations - this time freezing some small carnations and freesias. One of the blocks of ice was unusable - a solid mass of bubbled, but the others had enough clear areas to permit me to photograph.
The freesias, being smaller than the carnations, were quite different to photograph - their varied colours and more delicate petals produced a very different look in the ice
By far the best block of ice was one with a purple carnation within. All the edges of the petals were lined with bubbles, making for a very mysterious, and magical result.
No comments:

Printing for the Memory of Water 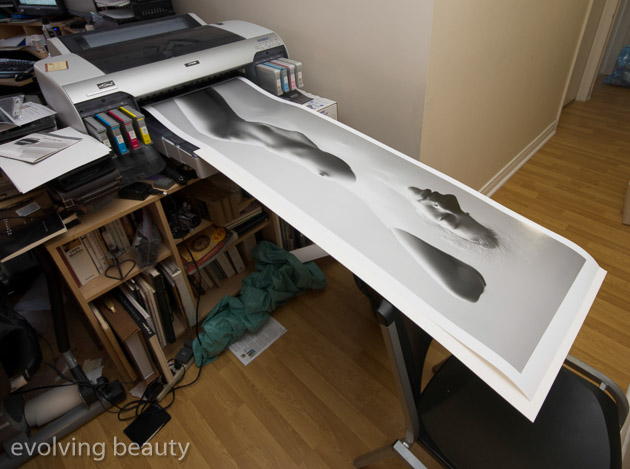 The printing of the last two images for the “Memory of Water” exhibition was a great pleasure - at 16"x54" in size, they are among the largest prints I have ever made. The two images at this size will be framed to 22" x 60" and bookend the exhibition which opens soon!
No comments:

Three Pose Together during a Visit to Halifax

This session was almost an embarrassment of riches; Kayla, Jenn and her boyfriend had come to Halifax for a visit, and offered to spend some time working with me. Fortunately, I had the time to work with them, and before the three arrived, I had everything set up; white sheets, bright luminous windows, and both colour and IR cameras ready to go.
I began the session working with Jenn and her partner. It is a real pleasure to work with a couple, as I can often step back from directing, and rely upon the internal chemistry between the two to create poses and moments to work with. There is a saying that a hint is more erotic than showing it all, but in this case, I applied that logic to lips, as opposed to bodies.
Though Jenn's boyfriend had never modeled before, Jenn's first experience modeling was working with Kayla, so she took the lead. In many ways, the hesitation and insecurity that often foreshadows a first session dissipates when working with couples, as they already have a comfort with one another.
It is a challenge to photograph three models under any circumstance, but made somewhat challenging when two of the three are lovers (I have numerous times photographed three models who are friends, and there is an equality of relationships that works well in those images). In this case, I tried to work beyond my usual default of “body as landscape” and focused on the relationship between the lovers, while still incorporating their friend, the third model.
No comments: