When working outdoors, the addition of a second model to a location is often a real challenge - fitting one body in to a setting can be hard enough, and inserting a second up the ante. Indoors however, is often the reverse, with a second model often leading to a more striking composition. The water set was more like the outdoor experience, with the second body presenting a real challenge in regards to the pose. In the end, it was more a factor of Ingrid and Miranda‘s ingenuity than any skill on my part that a pose like this came to pass. Once I saw the interweaving of their bodies, the final result was simple enough to realize.

This image was featured in the 2008 exhibition “Memory of Water”, at ViewPoint Gallery in Halifax, Nova Scotia
All through the Surface Tension series, I made images of the models which focused as much on their faces as their bodies; the above image is one of my favourites, as the balance between the faces and the bodies is really pleasing - both work on different levels within the same image. 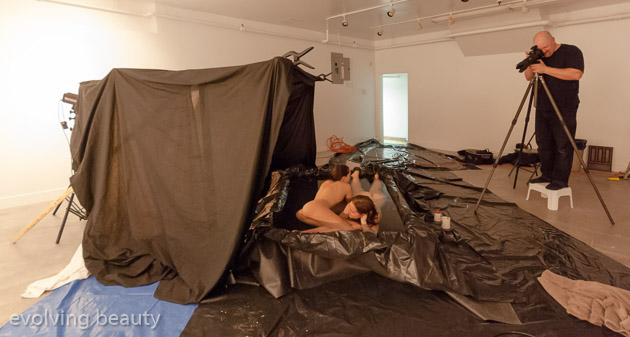 I would again revisit the Surface Tension project eight years later, in 2015.