Though Lavender and I haven't worked together since 2007, when I posted a notice seeking models for the water pool sessions, she was one of the first models to confirm a session time. She's worked in the pool before with Steve Richard (though with a very different style and approach) which gave her an immediate comfort with the process, and within minutes to getting into the pool, the first strong image (above) was made.
By this session, I'd not only had 6 chances to work with pool, but enough time to review the results, and evaluate how things could be improved. The issue of water motion had been solved (simply waiting more time for it to settle made all the difference), but I had also reviewed some of the experiments with notion (models pushing their bodies quickly up through the water surface) and decided that the results were worth pushing further. In most cases, the early experiments were not perfect - the Phase One medium format camera I was using for the session had a somewhat random delay to the shutter, so half the time the image was made just before or after the ideal moment. With this session (and later ones) I persisted with the ideal, and made a dozen or more images of each iteration, which ensured a number of really pleasing images focused on the concept for each pose.
Having access to the pool over two full days of photography really helped build a coherent flow between the sessions with a wide variety of models. Keeping the lighting and setting consistent helped tie the session together, but more than anything, I was able to take successes from one session and use them as a point of departure for the next session; in this case, an earlier image of Ingrid was the direct inspiration to this photograph of Lavender, made four hours later. 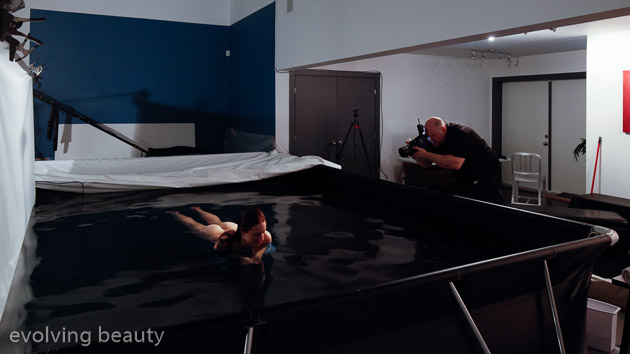