The second session was spent working with Jenn and her friend Krista; the two had first worked together with me in 2013, but this was the first time I'd worked with the two of them together in a studio. An unexpected challenge of working with the larger pool was how long it took for movement and surface rippled to settle down; it was frequently a minute or more before the water surface became smooth. With two models, this proved to be a real challenge, as even the unconscious shifting of balance or occasional deep breath was enough to unsettle things.
An advantage of working with multiple models is that their bodies can be used to create a composition independent of the surroundings; in this case, the mirroring of the pose in opposite directions plays off the mirroring of their forms in the water around the two models.
One of the last poses of the session worked with both models stretched out; it was this kind of image that really showed the advantage of working with the larger pool; in 2007, the pool I built was only eight feet end to end, and couldn't permit such an extended pose. Though this image pushed right to the edge of the diffusion panel which created the reflection on the water surface, with careful positioning of the camera, I could keep the model's bodies within the luminous reflection that is so integral to the success of this image. 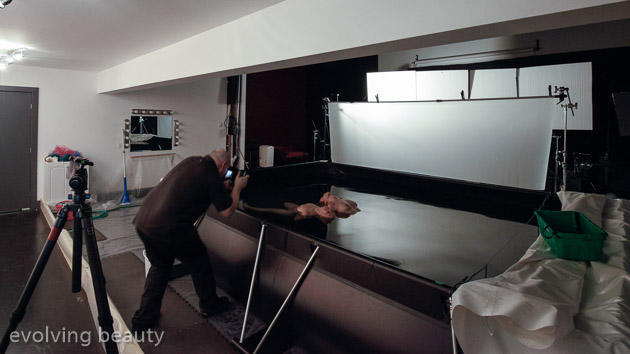