The fourth session exploring the possibilities of the large water pool was spent working with Karen; this was our first time working together indoors (we'd worked together outdoors in 2009), but Karen is no stranger to the studio, or the water pool, having worked with Steve Richard for years. What was interesting was that one of her first questions was "What haven't you done yet?"; I found it impossible to answer (it seemed to be a "how do I know what I don't know?" sort of thing), but it did provoke the question of what did I want to focus on. Between Karen's suggestions, and my continuing to push in directions that had worked before, we made some really pleasing images!
When I worked with the smaller water pool in 2007, I became fascinated with the half-faces that formed in the reflection at times; when they started appearing with Karen, I immediately asked her to stay as still as possible, so the surface of the water became as still as could be; of the dozen or so portraits I made, one had the reflection I hoped for.
The most adventurous images in the water pool explored water rushing off skin as it emerged from below the surface; I'd experimented with this in earlier sessions, but the above image of Karen was the first that really showed what I wished to portray - a mix between the slow moving water around her, and the swiftly receding water over her belly and hip - a perfect mix. 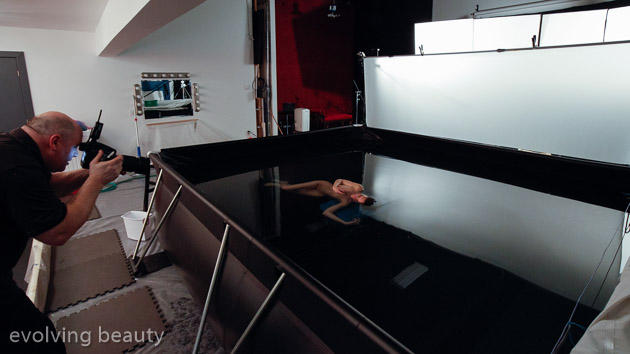