Saturday dawned with the arrival of the final participants in our group, and a great convention of artists on the lawn in the shade of the tepee. The single potential model was somewhat hesitant about the entire process (including being photographed Nude), and with the realization setting in that few, if any, models would be coming out for the retreat, I began to adjust my expectations for the trip, and, swallowing hard, prepared myself for a crash course in landscape photography. 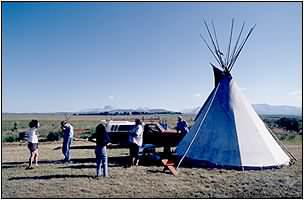 When I first thought of working in Alberta, all my image ideas focused on the mountains. I had traveled through them as a teenager by train and, while it permitted a wonderful view of the mountains, it allowed for little but a cursory visual exploration of them. Since I was seventeen, I'd held a visual memory of the mountains spread before the train in an infinite panorama. This trip, however, I'd have the opportunity to set that memory onto film, albeit without models.

My first view of the mountains around Waterton, Alberta, happened during a run into town for supplies. Driving into Waterton itself takes one past Waterton lake, which is below Vimy Ridge, a long, craggy mountain to the south. As we drove by, I could see a long, driftwood covered beach on the eastern shore of the lake, and on our trip back to Annie's, I suggested a stop to permit me to check out the possibilities (I only had my 35mm camera with me, and still was having problems adjusting to the idea of suddenly becoming a landscape photographer). 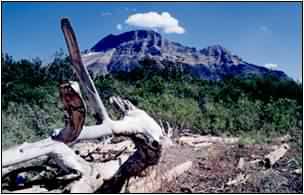 Truth be told, as I was walking down the beach, all I looked for were spaces to fit a nude and how to work the figure in with the mountains that loomed behind. On the whole, this train of thought led nowhere, because, in addition to the lack of bodies to pose, the logs on the beach were mostly small and straight, offering few possibilities for posing a body but I kept on walking.

At the very end of the beach, where the driftwood gave way to brush and swampy ground, there were some driftwood trees, complete with stumps, which struck me as distinct possibilities.

I enthusiastically began exploring the possibilities with my 35mm camera, all the while mentally picturing a figure in the image. The results that I saw through the viewfinder were very encouraging, and as I walked back to the car, I was dealing with two conflicting emotions; elation at the landscape that surrounded me, and the flood of possibilities that I was constantly glimpsing, and the ever-growing fear that no models would show for the entire time I was in Alberta. I faced the daunting prospect that the Alberta Portfolio, envisioned as one entirely focusing on the Nude, would be cancelled (with all the advance Patron's money refunded), or become simply a series of beginner landscapes.