Without a doubt  the single biggest benefit of the Internet in regards to my work is the people it has brought me into contact with. The majority of these contacts began as e-mail concerning my website; individuals send comments, I reply, and things grow from there. Sometimes, however, they grow even beyond the Internet. In the fall of 1998, I received an e-mail about my work inviting me to join a group of artists who work with the figure for a week long retreat in South-western Alberta. I thanked Annie, the writer of the e-mail, for her comments and politely declined the offer to attend her ad-hoc retreat and workshop since it was simply inconceivable that I could afford to travel all the way to Alberta. And there it ended...for a while. 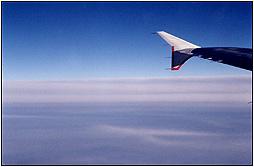 In early May, however, I received another, more impassioned invitation to visit Alberta; Annie had viewed my April Diary entry, and felt, as before, that I would be an asset to her retreat.
Again, I initially declined, but after a series of discussions with Joy, I decided to step off the virtual cliff, and try to make the trip happen. Getting the time off to make the trip was less of an issue than the expense of the trip itself and, with this in mind, I set about raising the funds through developing my first portfolio offering - the Alberta Portfolio. Sixteen portfolios will be made up, each containing ten images created during my trip to Alberta. There will be 1 artist's copy, 10 advance portfolios which have been offered for sale directly to my web page subscribers, and 5 public issue portfolios which will be released in late September. Once the portfolio prospectus was prepared and sent out, I notified Annie of my plans, and crossed my fingers that enough support would materialize to fund the project and facilitate the creation of the Alberta Portfolio. It did, and less than six weeks later, I was on the plane to spend 13 days in Alberta, working with the Nude in the western landscape. 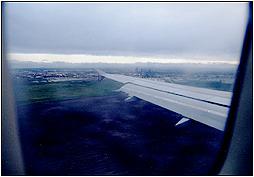 My flight to Calgary, Alberta, was long and uneventful, and I arrived at 9:45 PM, tired but excited. Early the next afternoon, I began the bus ride to Lethbridge, in South-western Alberta, where I was to meet Annie, and a couple of the other artists who would be attending the retreat. As it turned out, Annie was delayed, so I went and spent a couple of hours at one of the attending artist's houses, talking about art, and showing my work to several people. In the end, it was midnight before I finally arrived in Mountain View where Annie lived. Two days of travel, but everything arrived safe and sound (including the filmy I'd sent ahead by courier to avoid airport x-rays). We ate dinner in the first hour of a new day, and I went to bed, weary, but very much looking forward to my first sight of the Rocky Mountains the next morning.