The real focus of this weekend at Shenstone was the chance to work with three models - Ingrid, Miranda and Jesse on this day, and Tanya (as opposed to Jesse) on the next. The weather smiled on the weekend, and after a break for lunch, the three models and myself headed back to the small river that flows at the back of Shenstone, to begin the afternoon's session.

One of the joys of working with infrared photography is the magic of how it works with fabric - in this image, Jesse is wearing little black shoes, but in infrared, they became almost as luminous as her skin tone.
Most of the session was spent with the three models posing together, working their lines into the flow of the river. Truth be told, there wasn't enough water for the women to really become immersed in, but the interplay between their bodies, with curve meeting line meeting shadow, was just wonderful to photograph.
After an afternoon of modeling in a stream, Jesse was air-drying, sunning her self in a towel by the river. The sunlight was falling directly upon her, but by photographing into the shade, I turned what otherwise would have been a serious problem (the contrast of the sun) into an advantage, providing rim lighting, and separating Jessie from the darker surroundings behind her.

It is hard to describe the privilege of working with such comfortable, keen and confident models, and spend an afternoon celebrating beauty in such a fabulous setting. 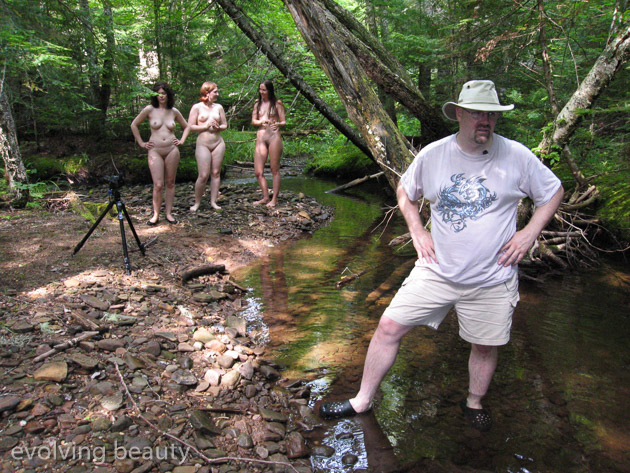