After a rough night's sleep (who knew Sunday night in Dublin was such a party-fest?), we loaded up the rental car, and drove out from Dublin to our first location in the creation of the Ingrid portfolio. After more than half-a-year of planning, I can honestly say, I've known for months were the first place I'd planned to work with Ingrid was - Bective Abbey. Why? Well, it is a ruined abbey, it is close to Dublin, and it has a small covered area of cloister - therefore it would work for my purposes, rain or shine. 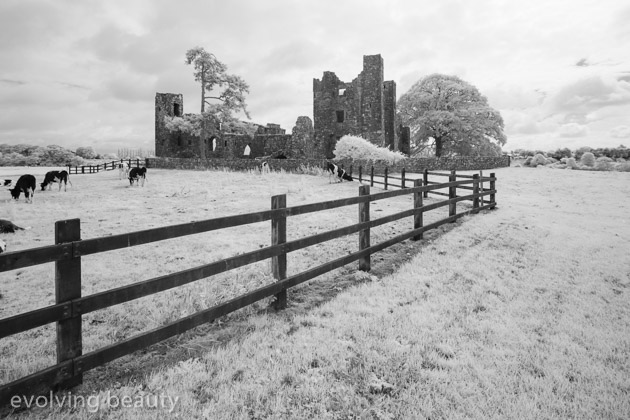 We arrived to find the abbey totally empty, so with a smile on my face, I pulled into the parking lot...only to be followed by a couple of other cars...in no time whatsoever, these disgorged enthusiastic visitors (both locals and tourists) who headed straight for where, moments before, I'd envisioned Ingrid and I happily working - a theme of sorts for our first session. While it was true the first group only stayed for fifteen minutes or so, the tour bus which pulled up moments after they left took a little longer.

Fortunately, Ingrid and I were expecting (or more accurately, resigned to) this possibility, and spent much of our time while waiting exploring the ruins, and roughing out ideas for images we could make together when there was no-one around. It didn't take too long to work out the couple of locations that would work well for photographs, and by the time the tourists cleared out (the first time), Ingrid and I had a solid game plan in mind, and swung into action, setting up and making a solid handful of images, before we suddenly had to halt, get Ingrid clothed again, and wait out the next set of tourists.

A more subversive assault on the session came from jet lag. The first set of images of Ingrid in a cloister window, was made with my colour camera, and somehow, I neglected to focus the lens...so the first 26 images (4-5 images of each pose) were a total write-off. All I can think is that I neglected to check if the lens was switched to auto-focus, and then forgot to check the focus in live-view (which is my normal approach to working these days. The simple fact is I was tired, and made a mistake.

Fortunately, the second group of images of Ingrid in the cloister windows had no such issues, as they were made in infrared, which I always have to manually focus (using live-view).

It took three separate tries to make all the images I wished with the cloisters - two more cars parked in the lot, and disgorged tourists who romped around the ruins while Ingrid and I milled about, waiting for them to leave. While this totally disrupted the flow of the session, it did give Ingrid a chance to warm up between images.

After another tourist-imposed break, Ingrid and I moved a little further into the ruined abbey. I have always had a love for spiral stairs, and while the stairs in Bective went no-where (literally, they ended at one-floor up, in a drop-off back to the ground), Ingrid was quite keen to work with them. Like much of the abbey, the stairs and walls were incredibly green, which proved challenging for the colour in the above image - thus black and white came to the rescue, keeping the colour casts at bay. 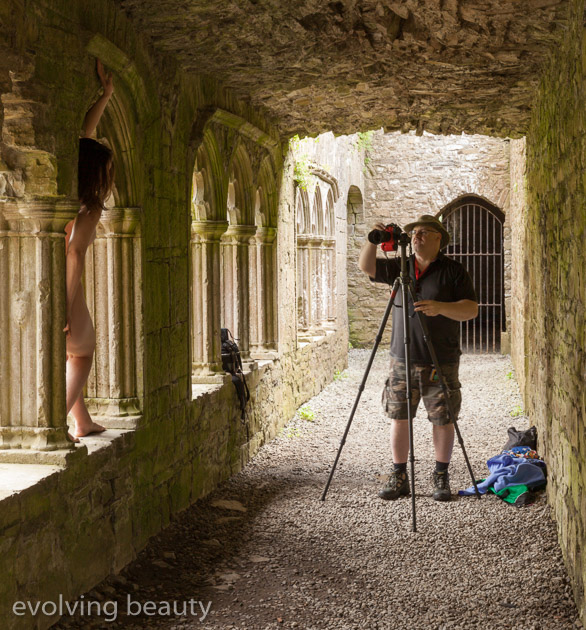 While we were working on the stairs, Angie was keeping an eye on the parking lot - but also caught a glimpse of Ingrid through a small window, and suggested I come around to the outside of the building to take a look. It was challenging to make (using both an exposure blend, and a focus blend), but the final result is both unusual within my work, and pleasing, so it was well worth the effort. 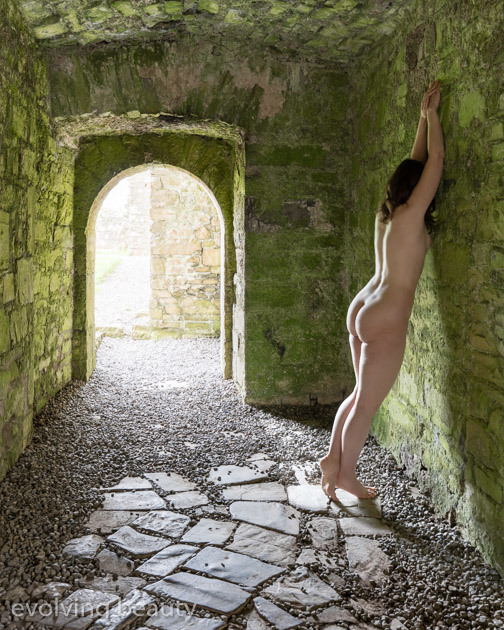 The last set of images, made in the corridor by the main entrance, took the longest to create...not in terms of the making of the images, which took only a couple of minutes, but in terms of the wait we had to go through for a time without any visitors in the abbey. After what seemed like forever (and was actually about fifteen minutes, we had our opportunity, and without hesitate, Ingrid walked through the poses we'd discussed working with the side wall, and then did some improvisation on the rock floor, before we packed up, headed to the car, and drove off looking for lunch.