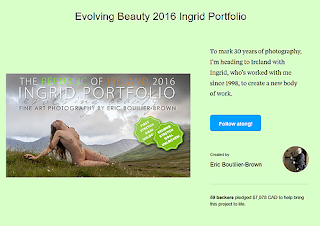 It's now 11 days since the Kickstarter campaign ended, and almost all the backers have completed their reward surveys. Though the project funds won't be transferred to be until early next week, I have already ordered the materials required for the creation of the backer rewards, and the project planning for the 2016 Ingrid Portfolio is now well underway. Flights are booked, two weeks of accommodations in Ireland have been selected, and the detailed planning has begun on numerous levels.

Most of my preparations are focused on researching locations Ingrid and I may work in. A combination of website, google earth, and physical travel guides are being used to first locate potential sites, and then evaluate them for their appropriateness for the project. Privacy is obviously the primary issue (both to prevent interruption of the process, and any chance of offending the locals), but ease of access access and overall aesthetics are also major considerations.​SML 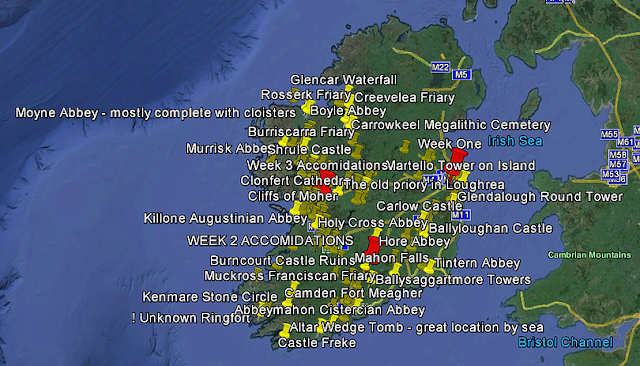 The role Google Earth plays in this process can't be understated; the ability to view locations from above, and get both a sense of their surroundings, and how they sit in the landscape as a whole is incredibly valuable.

To help with planing on the ground (where internet access will not be available), I've been creating a document with a page or two of each potential location, with sample photographs to remind me of the setting, Google Earth screen captures to show the surroundings, and Google Maps screen captures to provide detailed driving instructions, should Ingrid and I decide a particular space is worth pursuing. Once this document is completed, I will convert it to a PDF, sort the pages geographically (at the moment they are just randomly arranged) and put the final PDF on an Ipad to accompany us in the car!