In many ways, this summer is less a series of photo sessions (which is more typical for me), and more one single extended session, working with both Hailey and Ingrid. This is in part because of both model's love of working with water, and the simple fact that 90%+ of the images I have made this summer have been of the two of them (with Carol being the third model along for a couple of sessions). Thus, the first image, above, is a continuation of the shorter-shutters speed I have been using with the ocean for the last couple of sessions - in this case, revealing some really lovely colours and textures in the ocean below Hailey.
I'd been trying to make the above image since late June; during a solo session with Hailey, I made a set of images at the end of her body surfacing in seaweed, surrounded by calm water. For session after session since, I'd hoped to have the right circumstances arise, but no luck - until this session. As soon as I saw the space above, I asked Ingrid and Hailey to move into it and pose parallel to the camera, with the bodies flowing out into, and under the water. The evening light was just lovely, and I realized exactly what I'd had in my mind's eye from over 8 weeks earlier.
In 2005 (14 years ago) I made some similar portraits when working on the Miranda Portfolio; ever since I have had a real love of infrared portraits made in high grasses - and along one section of the shore line, a perfect patch of high beach grasses grows above the shoreline. I pauses to make portraits of both Ingrid (above) and Hailey (below) there...if I had thought of it, I would have made some portraits of both models together (echoing the portrait of Ingrid and Miranda I made in 2007)...but I was so caught up in the beauty of the light, I totally blanked on that possibility. 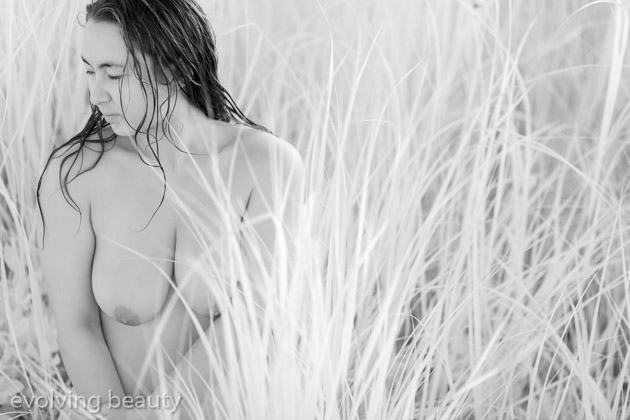 The last image of the day (below) was something of a surprise. After finishing in the grasses, the three of us simultaneously realized that sunset was imminent - so we rushed down to the shore, and sought out a last location to work in, focusing on the sunset light falling across the two models. After a few minutes, we found a good spot, and as the sun crossed the horizon, both models worked their way into the rocks, facing the sunset. I made a couple of colour compositions, and then, on a whim, shifted to working in infrared - and the light was just lovely. Where the earlier direct sunlight was giving stark highlights and deep shadows, the sunset sky provided soft, yet directional that flowed across the women in just the right way. While I do agree the colours of sunset can be lovely, in this case, I'll take the lumious tones of infrared!